Did you know that the second most popular reason people visit Sonoma County is for cycling? (The first, of course is wine.) In honor of the Levi Leipheimer’s King Ridge GranFondo bicycle race in the first weekend in October, this issue we feature the sport of riding a bicycle. The Levi’s GranFondo is a long-distance, mass-participation cycling event held on October 4th that welcomes professional, amateur, and recreational cyclists of all abilities. The event attracts roughly 7,500 riders from all over the state and beyond. (Other major events like the Coors Classic often come through the area.)  I’m more of a fair-weather recreation cyclist, so to get in the know, I sat down last week with long-time friend and cycling enthusiast Eric Acuna with the Santa Rosa Cycling Club to hear all about cycling in Sonoma County. 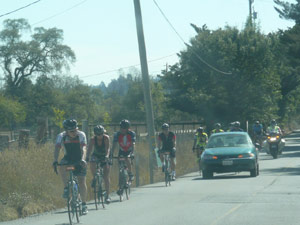 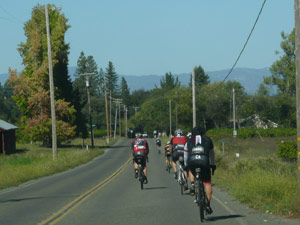 Most people ride bicycles because it’s a fun way to get some exercise. It is also a great way to relieve stress without making a negative impact on the environment. For people who commute to work on a bike, it is also a great way to make those rush-hour traffic jams irrelevant. Also, it is considerably less expensive to operate than a car. Many people get into cycling because it provides a great source of exercise with low impact on the knees.

There are four main types of cycling:

Eric likes to ride because it is great exercise. It also provides a rich and active social network between like-minded people who enjoy getting a workout while enjoying Sonoma County’s beautiful landscape.

There are many rides available in Sonoma County. You can check out the Bike Coalition at www.bikesonoma.org, the Santa Rosa Cycling Club, http://srcc.memberlodge.com/, and Krebs Cycle Products at http://www.krebscycleproducts.com/. They all have good routes for all levels of cyclists. You can also usually find route maps at your local bike shop. There are also tour rental companies that will set you up with a bike and a route sheet, and let you roam the roads of Sonoma County. There are also some companies that have guide-led tours.

There’s a nice, short, flat, easy ride which I’ve done several times and have enjoyed every time; it’s the Joe Rodota Trail from Santa Rosa to Sebastopol. It’s roughly 14 miles long, and almost completely flat. It’s also great to ride into Sebastopol, stop for an ice cream (or a beer or coffee, if you prefer), then bike back.

If you prefer off-road cycling, I recommend Annandale State Park in Santa Rosa.

For a medium ride, you can bike from Santa Rosa to Tomales and back. It’s roughly 50 miles round-trip, with big “rollers.” Rollers are hills that make you tired on the way up, then give you a nice coast back down the other side, before another climb back up the next hill.

For a longer ride, you might want to try the Levi’s GranFondo (www.levisgranfondo.com). You don’t have to do the race only on race day. The route is a long loop out over King Ridge, and is 108 miles long. It is very scenic, with lots of climbing.  It starts in Santa Rosa and goes out towards Fort Ross, then loops back up over Coleman Valley Road.  The scenery is simply amazing. 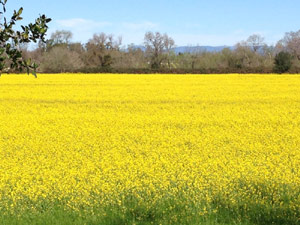 Rules of the Road

Rule 2: Follow the rules of the road. You have the same rights and duties as drivers.

Rule 3: Be careful/be aware of your surroundings.

Rule 5: Be predictable and conspicuous. 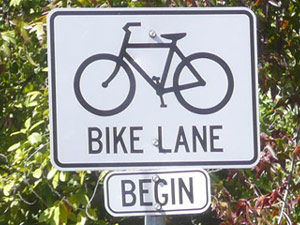 For people cycling on streets, ride with the traffic, on the right, and on the street (not on the sidewalk). Cars are coming out of driveways, and usually stop at the street, not at the sidewalk. When you’re cycling on a road in a group, ride single file on the right side of the road. This reduces road rage in motorists, which is dangerous for everyone.

For those of us who drive cars around the county, we need to be aware that there is a California state law that says you must share the road with cyclists. Cyclists have just as much of a right to be on that street as you do (except for on freeways, of course.) They have the right to take up the entire lane, if necessary. (On an interesting note, it is homeowner’s taxes that pay for the roads, not the gas tax, so cyclists pay the same amount for the roads as motorists, but they put less wear and tear on the road. So, in a way, cyclists subsidize the roads to a greater extent than motorists.) If you can pass a cyclist safely, you must give them three feet of clearance. If you can’t, wait. I think that the county should put in a bike lane going from Santa Rosa all the way out to the coast for the safety of bicyclists and motorists alike.

For off-road cyclists, yield to horses and hikers. If you are going to pass someone, let them know you’re coming up from behind with a bicycle bell or a call. Be especially careful around horses because they can get spooked.

If you must ride at night, use a white headlight (mostly to be seen, not so much to illuminate your way), and a red tail light.  If you must leave your bicycle unattended for any length of time, lock it up. To lock it, use a U-shaped lock, a heavy steel cable clock, or some combination of the two, and be sure to secure both wheels and the frame to an immovable object. 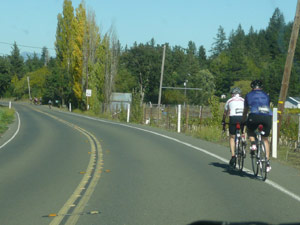 For more on cycling dos and don’ts, you can find some great information at www.bikeleague.org.

I highly recommend this low-cost, low-impact exercise. It’s a great way to get out and enjoy beautiful Sonoma County.

By Peter Rogers, with special thanks to Eric Acuna

2 thoughts on “Biking in Sonoma County”