For those of us who love the water, there is nothing more engaging than a surfer at play.   The way they harness the force of the ocean, riding the waves becomes a dance with the ocean itself.   Each wave is unique, each moment an active metaphor for what it is to be a human in deep conversation with the earth’s essential element, water.   There is something primal and awe-inspiring in their ability to become a part of the moving landscape.   They playfully emulate natural spirals, and artfully carve shapes into both the great moving canvas of the Pacific, and into our collective cultural imagination. 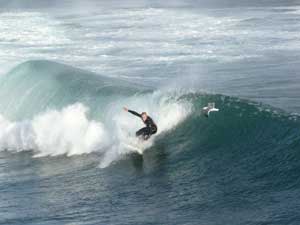 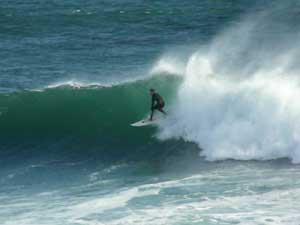 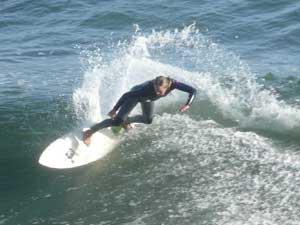 For years now, as an avid swimmer and child of the Left Coast, I have been fascinated with the water benders we call surfers.  I’ve watched and photographed them in Santa Cruz, but even though I grew up here (and swam in the Laguna at Salmon Creek as a kid), it never occurred to me that people were surfing our beaches.  It was a So Cal thing.  Right?  After all, as children we had been warned from swimming in our native water for some pretty good reasons:  undertows, rip currents, sleeper waves, rocks… it was just too cold and sharky!  I am glad to know that I was wrong; the words “surfing” and “Bodega” do go hand and hand. 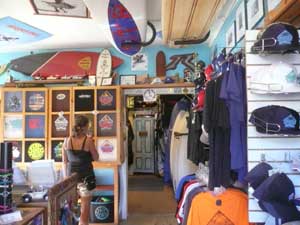 Sarah Molica, owner of the Northern Light Surf Shop, in the town of Bodega schooled me in the history, culture and practice of surfing in the area, and opened my eyes to a whole new way of looking at our local coast.   We went to elementary school together,  and to me,  Sarah is the definition of success…she is happy in her life and does what she loves for a living.  Although the pace might seem slow to some, sitting out front of the shop, sharing a beer and conversation with locals, helping customers that wander in, and returning to the porch to talk and wave back at the people in cars who smile and wave their greetings to her…it seems so good, so “just right.”  It is clear that this little surf shop and the people in it (Sarah, her boyfriend, Ben Dougherty, and co-owner/dog/child; they have two shop dogs:  a 90lb german Shepard named Lexie, and a smaller shop dog named Bug) are at the hub of a very happy, relaxed, and kind community of people who love the water.

A Surfing Story:
To better understand her connection to the local history and her love of the sport, I asked Sarah how long she has been surfing.  She started by body boarding, then she tried to stand up (she is not sure which one of her crew of friends got up first), then she got to short board.  To be sure, Sarah’s story of surfing and her connection to the shop is one of friends.  “In high school we were all cutting class.  They would say: ‘Oh, man I’ve got to get out there, the conditions are perfect.’” Laughing in the sunlight and looking like the picture of health and beauty, she told me how she would use her yearbook pass to get her friends out of class and go surfing throughout high school!  If necessary, she would say the pictures didn’t come out so they would have to take them again.  Apparently, they never got in trouble as it “was a legitimate excuse…then I had camera out there, so I could take pictures all day” (something I can really appreciate).

Sarah shared with me the history of the store.  The Northern Light Surf Shop started out in Tamales, then moved to Bodega (in the building that’s now The Birds museum around the corner).  The original owner was Steve Quartz, then Don Martin (who moved it to Bodega).  As a teenager Sarah used to hang out there with her friends (Nick Marlow, Ben Hakala, Able Damkoehler, and Jakla Jonpular).  The boys worked in the shop and she “worked there some – helping them out.  They’d be asleep on board bags beneath the wetsuits.”  Rather than going to college, Nick and Able and Ben pooled their money to buy the surf shop.  They co-owned it and moved it to its present location.

After several years, Nick and Able departed, and she was still working there when her son was born.  When he was two years old she worked there with her son in tow, and he chewed on the surf wax.  “Smells good, why not?”  She began buying the clothes for the shop.  She mentioned to Able that if he ever wanted to sell she would buy it.  So she and her boyfriend, Ben, bought it after 12 years of managing it.   “It’s a pretty sweet gig…hang out talk about all kinds of stuff, people bring you beer…Waves from everyone going by.”

Why Surf?
“I think you get hooked on the feeling of standing up and riding waves…to harness a natural energy.  There are very few places you can do that, but in the ocean you can.  (Maybe it’s) how the Indians must have felt when first jumped on a horse –‘this is amazing!’  Its hard work and you’ve got to put in the time.  Its addicting.”

Before settling down, Sarah, spent one year on a surf trip, going around the world, surfing places like Tahiti, Fiji, Hawaii, and New Zealand.  “Most surfers will go on surf trips as often as they can, always looking for the perfect wave or something different.  That stereotype is true.  We like to travel.”  I asked her about her favorite spot, and she said she can’t divulge her favorite local spot, but her all-time favorite spot is in Fiji.  “Soso’s a tiny little island in Fiji; no one will ever find it anyway,” she laughed.

“Just because you are a surfer doesn’t mean you smoke pot. Lawyers, cops, you would never guess who surfs!  Realtors, a district attorney was attacked by a shark.  You wouldn’t know who surfs.  Pot and surfing don’t go hand in hand.”

But there are some things that follow the stereotype about Surf culture:  it is a “happy and fun group.  Not negative.  When you are finished (surfing) you are not like, the world is offal.” 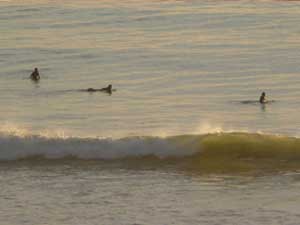 Surfing Bodega
Our coast is extremely hard to learn on.  “If you can surf here, you can do it anywhere in the world.  There is no point-break so you need to get wave knowledge.”

According to Sarah, the warmest time of the year is late summer and fall.  In the words of our local expert: “The water is coldest in the spring, when there is a cold current that goes through.  It can be warmer in Oregon than here in the spring (48 degrees).  In October, it’s sometimes in the 60s.  It’s an El Nino year.  The water is so warm and there are weird jelly fish.  (Rain is coming.)  Good times for big surf are fall and winter (October/November).  Most people come in summer when they have time off work, but it’s better later (not early summer).  Northwest swells are big offshore through fall.  The first pattern is right on time.”  Big waves often come in January and many people go out to watch the waves in the new year.  She clearly demonstrates her knowledge and the theory that “Surfers all have to be weathermen.”  “They schedule work around it, if they want to go out every day.  It’s important to the hobby and the sport.”

I asked her where she likes to surf and if she has any favorite places.  “Yah, there are secret spots, but I can’t tell you!  With big waves, as big as Mavericks!  You have to use boats to get to them, but its well worth it to the true surfers.  Guns, big wave boards.  They have a shaper that has been there for 40 years.  Maverick sized waves.  Not many who ride the super big waves.”

Sarah says our best local beach is Salmon Creek.  “White water on inside.  With a main break, even on a funky day.”

Hazards
Fall is also shark time.  “It’s unfortunate…Every surfer thinks about it, but not too much.  If you are thinking about it too much, it’s time to go in and get out of the water and not take a chance.  They are going to sense your fear and come, or you are sensing them.  Either way, play it safe rather than sorry.”  I agree.  Sarah says that in the summer the sharks go to Hawaii; they go deep.  She also tells me that in 1968 there was a shark attack in Monte Rio (in the Russian River)!  Yikes!  Sarah on sharks says:  “I say fight to the death!  I think they will give up.  They don’t really want you.  (They want seals.)  Poke them in the eyes – rip off gills.  Then they would bleed out (lungs).”

Advice for surfers
Sarah advises, “beginning surfers should stop in a knowledgeable surf shop.  Every day is different.  Conditions change and it’s good to know the size and direction of the waves; how the riptides are flowing.  You can rent equipment…riding the white water in…not get shredded on the rocks at Portuguese beach.”

“Experienced Surfers are on their own.  You should know what you are looking for.  Come alone or with one other person, not in a car full of Marinites.  No one likes 7 guys jumpping out at your favorite spot.   Although we are not localists.”

1) Do pushups.  You will need to push yourself up to standing and will do a lot of paddling, which is hard on your arms.

3) When you are in the water, triangulate or line up 2 points on the beach; one close and one farther back to be able to judge your relative position once you find a good area for waves.

Give it a try:
Although I’ve only taken one surf lesson, I highly encourage giving it a try to anyone who loves the water and watching the waves.

Northern Light offers a free surf update on facebook every day or by phone at 707-876-3110.  You can take surf lessons from Abel Domkoelher (707-536-7960), or visit for more info check out NorthernLightSurf.com.

On a personal note, I want to thank Sarah for reminiscing about school days, and for giving me a glimpse inside local surf culture; adding a richness to my love of the area.  I’d like to leave you with a personal anecdote.  A few years ago on a beach on the North Shore of Oahu, Hawaii, I met a man wearing a Northern Light Surf Shop shirt.  I asked him about the shirt and he said he had just moved to the islands from Bodega.  It really is a small world.  Mahalo. 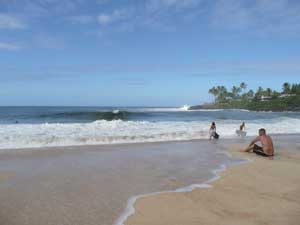