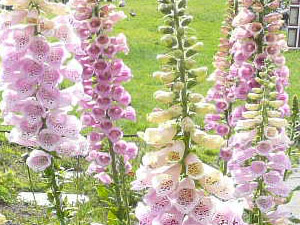 Pretty, magical, deadly.  Foxgloves remind me of Tinkerbell and her friends, dwelling on the edge of deep forests these flowers speak of mystery; but they also remind me of my mother.  And as it is almost Mother’s Day, it seemed appropriate to feature a flower found in her forest garden.  As a child I remember my mother telling me that digitalis was not to be put in the mouth like a honeysuckle or other pleasant blooms, for inside the lovely shaped flower was strong medicine related to the heart.

In fact, depending on the species, the digitalis plant may contain several deadly physiological and chemically related cardiac and steroidal glycosides.  Thus, the digitalis plants have earned several, more sinister, names:  dead man’s bells and witch’s gloves. The whole plant is toxic and should be handled with care. 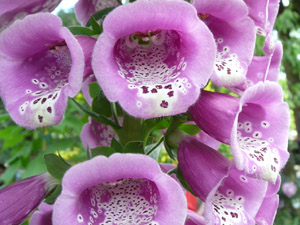 The long spires of speckled open mouths are reminiscent of snapdragons.  The graceful stalks support blooms which come in shades of pink, white, yellow and purple.  Growing several feet high, they seem to belong among the redwoods.

While the scientific name (Digitalis) “finger-like” relates to human scale, the common name “foxglove” relates to something smaller than a human.  The name foxglove is a very ancient one and exists in a list of plants as old as the time of Edward III.  It was thought that the “folks” of our ancestors were the fairies, and the pretty colored bells of the plant were designated “folksgloves,” which became “foxglove.”

One thought on “Featured Flower: Foxgloves”