Although it’s not exactly a flower, I felt compelled to feature this plant this month. This time of year when the weather is fickle—sometimes overcast or crisp and cool and other times scorching hot—there is one plant that stands out as a marker of the season; Pampas Grass. Although these large landscape elements are present all year round, it is now that they unfurl their billowy fronds, like glowing flags made of gossamer fluff. 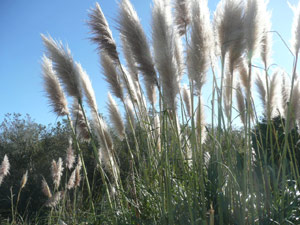 As a child, I heard that the name came from the plume which resembles the feather in a stately hat, and I fondly associate them with the dock on the pond, an important element of home. Although they can be a nuisance in that they spread, they also provide a habitat to pond creatures like ducks, frogs, turtles, and occasionally small mammals seeking nesting and protection from predators. A word of caution: Pampas Grass leaves are very, very sharp and have serrated edges that cut like blades. This is no paper cut. They will really leave a deep slice if you were to grab and pull, so handle with caution (and gloves). 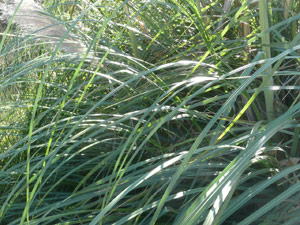 In addition, it is unclear whether or not the small seed-bearing fluffs that compose the fronds are irritating or allergenic, but I have the memory of them being a bit like fiberglass, so you may want to consider using them primarily as outdoor decorations. However, I would imagine that if handled with care, plumes cut now, at the height of their glorious display, could be used in a large lobby or entryway arrangement. (Apparently, according to Wikepedia, there is some alternative culture meaning associated with these plants, so maybe choose carefully where you put them.)

A good place to see Pampas Grass in bloom right now is at the coast in Bodega Bay, especially at the mouth of the river at Jenner. How they got there I do not know, as they are considered invasive by some (and need to be cut back so the large mounds do not take over or create a fire danger with their dried leavings). The grasses are native to South America and were introduced to Europe and eventually the U.S. Still, they are beautiful. Like flags on the hillside, they shine in the sunlight and make me hopeful that even though the seasons are changing toward darkness, some good will come. 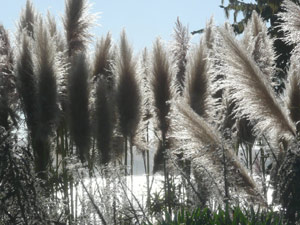 Text and photos by Nadja Masura