In the United States, the small town of Sebastopol is famous for its Gravenstein apples.  It is immensely versatile; there is no better apple on earth for eating whole, making apple sauce, or being in apple pie.  It has a crisp, juicy texture, a tart, aromatic flavor, and a pure, old-fashioned charm.  Russian fur traders first planted the West Coast Gravenstein orchards at their outpost in Fort Ross in 1820.  Cuttings from theses trees were likely used to start the Sebastopol orchards.  Unfortunately, most of the orchards in Sonoma County are now gone due to a combination of a shift to wine production, suburban development, and economic changes in the apple industry.  In 2005, Slow Food USA declared the Gravenstein apple a “heritage food” and included it in their Ark of taste.  According to Slow Food USA, Gravenstein production in Sonoma County is currently 750,000 boxes (15,000 tons) per year, and a full third of the fruit (5,000 tons) is of premium market quality.  We should protect what few Gravenstein orchards remain.  The Sebastopol Gravenstein Apple Presidium formed to promote and protect the farmers who grow these delicious apples. (Researched by Peter Rogers) 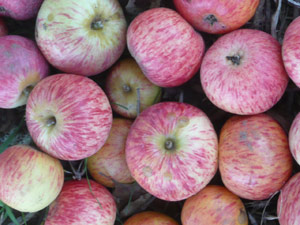 A dozen or more Gravenstein Apples

(To the apples you can add bits of quince or Bartlet pears which are also in season.)

(You can sweeten the apples with honey, sugar, agave etc if you like or add cinnamon, but I like it just the way it is.)

Put on medium heat, stirring occasionally with a slotted spoon until most of the water has been replaced with juices and you have reached your desired consistency (this should take less than 12 minutes)

In a small bowl combine twice as much sugar with powdered cinnamon (the mixture should look like a nice brown sand).  Separate the white of the egg into a separate small bowl and combine the yolk with the cinnamon/sugar and stir with a spoon until it is a paste.  Preheat your oven to 375 degrees or as indicated on the package. Unroll the dough onto a cookie sheet (you can use left-over pizza dough or puff-pastry dough etc.) and cut it into long 2-3 inch wide strips.  With a spoon, paint a row of the filling onto one side of each of the strips, fold over lengthwise and give each strand a couple of twists (return to backing sheet).  Paint the twists with the egg white and place in the over for 9-12 minutes or as directed.

Let applesauce and cinnamon sticks cool a bit and serve.  I would suggest that if you like apple pie a la mode, that you spoon the still warm applesauce into a dessert bowl with the a dollop of vanilla ice cream and garnish with your cinnamon “crust” pastries.  Yum!