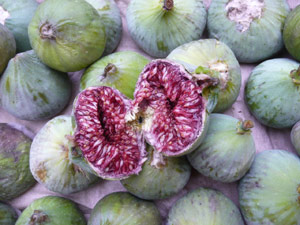 Preheat the oven to 350 degrees. Make a fig mix by scooping out the insides of figs into a bowl. (If a little of the fig skin gets in, that’s okay; you can eat the skin.) Add 1 cup of chopped pecans, 3–5 shakes of ground cloves, 3 sprinkles of salt, 1 tsp. molasses, a shake of tarragon, 2 shakes of paprika, and a dash of freshly-ground pepper. Stir, and set aside.

Fillet pork ribs lengthwise to create long, thin strips. Spread fig mix on top of strips. Roll strips up like a cinnamon bun, and tie with cotton butcher’s twine. Set meat roll into a casserole dish, and set aside.

Make a marinade by mixing in a bowl: 2 tbs. molasses, sherry, finely crumbled ½ cube beef bouillon, 2 shakes of soy sauce, a dozen shakes of ground cloves, a dash of paprika, olive oil, 16 grinds of freshly-ground pepper, and a pinch of salt. (Optional:  add a dash of balsamic vinegar.) (Also optional: add 4 thin slices of fresh ginger, and let marinade for a few minutes.)

Place the slices of fresh ginger on top of each meat roll. Spoon half the marinade over meat rolls, reserving some marinade for later in the cooking process.

Cook meat in preheated oven for 22 minutes. Spoon remaining marinade over meat rolls. Cook for another 23 minutes, for a total cooking time of 45 minutes.

When serving, be sure to cut off the twine. Do not eat the ginger.

Combine ricotta, mascarpone, egg, salt, vanilla, and agave sweetener in a bowl. Stir, and set aside.

In another bowl, make a fig mix by scooping out the insides of 6 figs into a bowl. (If a little of the fig skin gets in, that’s okay; you can eat the skin.) Add molasses, honey, 2 shakes of cinnamon, and 2 shakes of clove. Mash together.

Grease a muffin tin. Peel off some phyllo dough (2–3 sheets thick), and cut into quarters. Nestle dough into muffin tins, creating little dough cups. Make enough dough cups for all the muffin tins. Spoon 1 dollop of the fig mixture into the bottom of each muffin tin. Spoon in custard mix on top. Garnish with a thin slice of a small fig. Bake at 350 degrees for 25 minutes. Let cool for at least 10 minutes before serving.

Recipes and photos by Nadja Masura

← Featured Flower: Fuchsia
Home: Fountains and the Sound of Water →

One thought on “Featured Food: Fig”